Although it was on the cool side, the Halloween Cyclocross Race and Bike Fair put on by Bike Friendly Oak Cliff was a great day of cycling-related activity. Once it warmed up a little, bicycle-powered smoothie sales picked up a lot. Many thanks to BikeDFW volunteers Anita Mills, Jenny Rilling, Warren Casteel, and Bob Murdoch. A few photos are posted below and a more complete set can be viewed here, thanks to Richard Wezensky. See the complete story here.
BikeDFW Fall Meetup - October 2012

The Fall Meetup was held at REI in Dallas and accomplished what we hoped it would, by bringing 60 cycling enthusiasts and advocates together from around the metroplex to network about ideas and tactics for increasing cycling. There were great presentations by Dave Carter from the City of Richardson (below right), Maryann Means (Fort Worth Mayor’s Office), Julia McCleeary from the City of Fort Worth (below left) and the three amigos from Bike Friendly Fort Worth. Complete story and more photos.
Dallas Bike to City Hall - October 2012 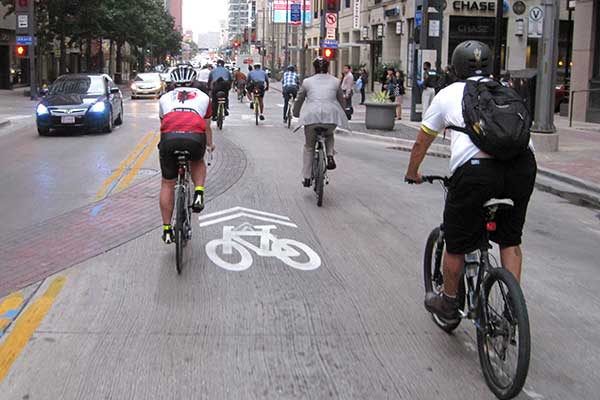 A few of us from BikeDFW joined Mayor Rawlings, city Council Members Scott Griggs, Angela Hunt and Monica Alonzo, Bike Coordinator Max Kalhammer, and a cadre of bike supporters for Dallas’ annual Bike to City Hall Day. Council Members Delia Jasso and Sheffie Kadane were also there in support. The council expressed the city’s appreciation to Downtown Dallas, Inc. who supplied seed funding to get the initial stages of the Dallas Bike Plan off the ground. Read the complete story.
Traffic Skills 101 Cycling Course - September 2012

There was a great turnout for the Sept. 30, 2012 Traffic Skills 101 course even though it was raining. The on-bike skills portion was conducted inside a lighted parking structure. It worked out great! Here are some photos courtesy of Richard Wezenzky.
http://www.flickr.com/photos/dickdavid/sets/72157631662196339/
White Rock Lake Hydration Station, Dallas - August 2012

It was a busy day at our "hydration station" set up for cyclists on East Lawther Drive at White Rock Lake in Dallas. We provided cold drinks, food, and expert advice on riding in the Texas heat.
Bike Commuter Energizer Station at Arapaho Center DART Station, Richardson - May 2012

The BikeDFW/Bike Friendly Richardson Bike To Work Day Energizer Station was a great success! We had about 2 dozen bike commuters stop by to recharge for their ride to work – and we think we motivated dozens of other commuters to think about biking. Here are some pics. Click here to see all of them.
​
We would like to thank:
Since it was such a great success, we’d love to do this every year – AND we’d love to see other organizations  doing it around the Metroplex.
Ciclovia de Dallas - April 2012 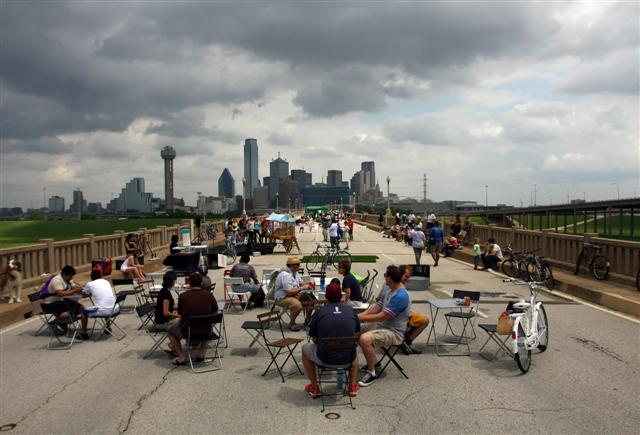 Two officers of Bike Friendly Oak Cliff, sponsors of the event, discussed their plans this morning with the City Council’s Quality of Life Committee.

“It’s a time for the community to come together and experience each other at a slower speed,” said Andrew Howard, secretary of the advocacy group and a principle in Dallas-based Team Better Block.

He and Zac Lytle, Bike Friendly president, also talked about the worldwide success of ciclovias and how the volunteer group could use the city’s help in keeping the Dallas effort rolling.

“We’d like to make this a regular event,” Lytle told the committee, adding: “To be effective it’s something the city needs to take on. We’re hoping this will plant a seed.”

Their words drew positive replies. “Look for me on the 14th,” said council member Dwaine Caraway, after encouraging the pair to market the event to people and businesses in southern Dallas.

Carolyn Davis asked them about creating a Bike Friendly South Dallas.
​
Angela Hunt, a bicycling advocate and chairwoman of the committee, mentioned she had attended a ciclovia in Colombia, where the concept originated and is now a regular Sunday event.
​
“The city of Dallas needs to take this on,” she said. “You’ve given us a blueprint.”
Back to: Events